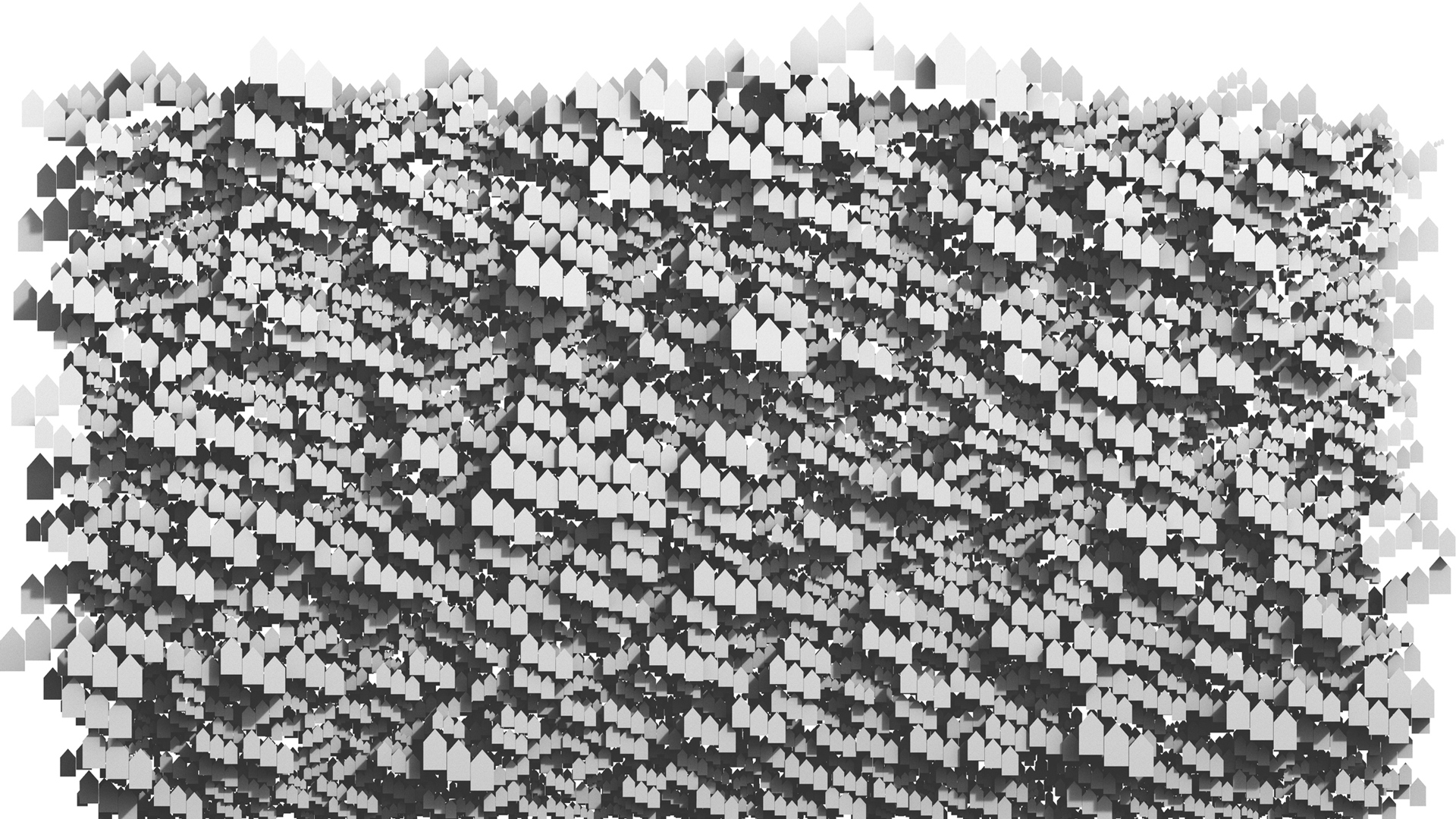 Part relationships play an important role in architecture. Whether an aspect of a Classical order, a harmonious joining of building components, a representation of space, a partition of spaces, or as a body that separates us and identifies us as individuals. From the very outset, every form of architecture begins with an idea of how parts come together to become a whole and an understanding of how this whole relates to other parts. Architecture first composes a space as a part of a partitioning process well before defining a purpose, and before using any geometry.

The sheer performance of today’s computational power makes it possible to form a world without a whole, without any third party or a third object. Ubiquitous computing fosters peer-to-peer or better part-to-part exchange. It is not surprising then that today’s sharing represents an unfamiliar kind of partiality. From distributive manufacturing to the Internet of Things, new concepts of sharing promise systematic shifts, from mass-customisation to mass-individualisation: the computational enabled participations are foundational. It is no longer the performance or mode of an algorithm that drives change but its participatory capacities. From counting links, to likes, to seats, to rooms: tools for sharing have become omnipresent in our everyday lives. Thus, that which is common is no longer negotiated but computed. New codes – not laws or ideologies – are transforming our cities at a rapid pace, but what kind of parthood is being described? How does one describe something only through its parts today? To what extent do the automated processes of sharing differ from the partitioning of physical space? How can we add, intervene and design such parts through architecture?

The relationship between parts and their whole is called Mereology. In this issue of Prospectives, mereology’s theories and the specifics of part-relations are explored. The differences between parts and the whole, the sharing of machines and their aesthetics, the differences between distributive and collective, their ethical commitments, and the possibilities of building mereologies are discussed in the included articles and interviews.

Just as mereology describes objects from their parts, this issue is partial. It is not a holistic proposal, but a collection of positions. Between philosophy, computation, ecology and architecture, the texts are reminders that mereologies have always been part of architecture. Mereology is broadly a domain that deals with compositional possibilities, relationships between parts. Such an umbrella – analogue to morphology, typology, or topology – is still missing in architecture. Design strategies that depart part-to-part or peer-to-peer are uncommon in architecture, also because there is (almost) no literature that explores these topics for architectural design. This issue hopes to make the extra-disciplinary knowledge of mereology accessible to architects and designers, but also wishes to identify links between distributive approaches in computation, cultural thought and built space.

The contributions gathered here were informed by research and discussions in the Bartlett Prospectives (B-Pro) at The Bartlett School of Architecture, UCL London from 2016 to 2019, culminating in an Open Seminar on mereologies which took place on 24 April 2019 as part of the Prospectives Lecture Series. The contributions are intended as a vehicle to inject foundational topics such as mereology into architectural design discourse.

This compilation starts with Giorgio Lando’s text “Mereology and Structure”. Lando introduces what mereology is for philosophers, and why philosophers discuss mereological theses, as well as disagree one with another about them. His text focuses in particular on the role of structure in mereology outlining that from a formal point of view part relations are freed from structure. He argues that independence from structure might be the identifying link between mereology and architecture. The second article “From Partitioning to Partaking” is a plea for re-thinking the city. Daniel Koehler’s essay points to the differences between virtual and real parts. Koehler observes a new spatial practice of virtual representations that render previous models of urban governance obsolete. He argues that the hyper-dimensional spaces of a big data-driven economy demand a shift from a partitioning practice of governance to more distributed forms of urban design. In “Matter versus Parts: The Immaterialist Basis of Architectural Part-Thinking” Jordi Vivaldi Piera highlights the revival of matter in parallel to the discrete turn in contemporary discourses on experimental architecture. The essay gravitates around the notion of part-thinking in association with the notion of form. Fluctuating between continuous and discrete, the text sets out requirements for radical part-thinking in architecture. As a computational sociologist, David Rozas illustrates the potential of decentralised technologies for democratic processes at the scale of neighborhood communities. After an introduction to models of distributed computation, “Affordances of Decentralised Technologies for Commons-based Governance of Shared Technical Infrastructure” draws analogies to Elinor Ostrom’s principles of commons governance and how those can be computationally translated, turning community governance into fully decentralised autonomous organisations.

Departing from the Corbusian notion of a ‘machine for living’, Sheghaf Abo Saleh defines a machine for thinking. In “When Architecture Thinks! Architectural Compositions as a Mode of Thinking in the Digital Age” Abo Saleh states that the tectonics of a machine that thinks is brutal and rough. As a computational dialogue, she shows how roughness can enable posthumanism which, in her case, turns “tempered” parts into a well-tempered environment. Ziming He’s entry point for “The Ultimate Parts” is the notion of form as the relations between parts and wholes. He’s essay sorts architectural history through a mereological analysis, proposing a new model of part-to-part without wholes. Shivang Bansal’s “Towards a Sympoietic Architecture: Codividual Sympoiesis as an Architectural Model” investigates the potential of sympoiesis. By extending Donna Haraway‘s argument of “tentacular thinking” into architecture, the text shifts focus from object-oriented thinking to parts. Bansal argues for the limits of autopoiesis as a system and conceptualises spatial expressions of sympoiesis as a necessity for an adaptive and networked existence through “continued complex interactions” among parts.

Merging aspects of ‘collective’ and ‘individuality,’ in “Codividual Architecture within Decentralised Autonomous System” Hao Chen Huang proposes a new spatial characteristic that she coins as the “codividual”. Through an architectural analysis of individual and shared building precedents, Huang identifies aspects of buildings that merge shared and private features into physical form. Anthony Alviraz’s paper “Computation Within Codividual Architecture” investigates the history and outlook of computational models into architecture. From discrete to distributed computation, Alviraz speculates on the implications of physical computation where physics interactions overcome the limits of automata thinking. In “Synthesizing Hyperumwelten”, Anna Galika transposes the eco-philosophical concept of an HyperObject into a “Hyperumwelt”. While the Hyperobject is a closed whole that cannot be altered, a Hyperumwelt is an open whole that uses objects as its parts. The multiple of a Hyperumwelt offers a shift from one object’s design towards the impact of multiple objects within an environment.

Challenging the notion of discreteness and parts, Peter Eisenman asks in the interview “Big Data and the End of Architecture Being Distant from Power” for a definition of the cultural role of the mereological project. Pointing to close readings of postmodern architecture that were accelerated by the digital project, Eisenman highlights that the demand for a close reading is distanced from the mainstream of power. The discussion asks: ultimately, what can an architecture of mereology critique? The works of Herman Hertzberger are an immense resource on part-thinking. In the interview “Friendly Architecture: In the Footsteps of Structuralism”, Herman Hertzberger explains his principle of accommodation. When building parts turn into accommodating devices, buildings turn into open systems for staging ambiguity.**

The issue concludes with a transcript from the round table discussion at the Mereologies Open Seminar at The Bartlett School of Architecture on 24 April 2019.

The contributions would not have been possible without the framework of Bartlett Prospectives (B-Pro) at The Bartlett School of Architecture, UCL. I want to thank Frédéric Migayrou for his vision, commitment and long years of building up a research program, not only by architecture but through computation.

I would like to thank Roberto Bottazzi for the years of co-organising the Prospectives Lecture Series, where plenty of the discussions that form the backbone of this issue took place. I would like to thank Mario Carpo for the intellectual challenges, Andrew Porter for enabling so many events, Gilles Retsin, for without the discrete there are no parts, Mollie Claypool for the editing and development of Prospectives journal, and Vera Buehlmann, Luciana Parisi, Alisa Andrasek, Keller Easterling, Matthew Fuller, John Frazer, Philippe Morel, Ludger Hovestadt, Emmanuelle Chiappone-Piriou, Jose Sanchez, Casey Rehm, Tyson Hosmer, and Jordi Vivaldi Piera for discussions and insights.