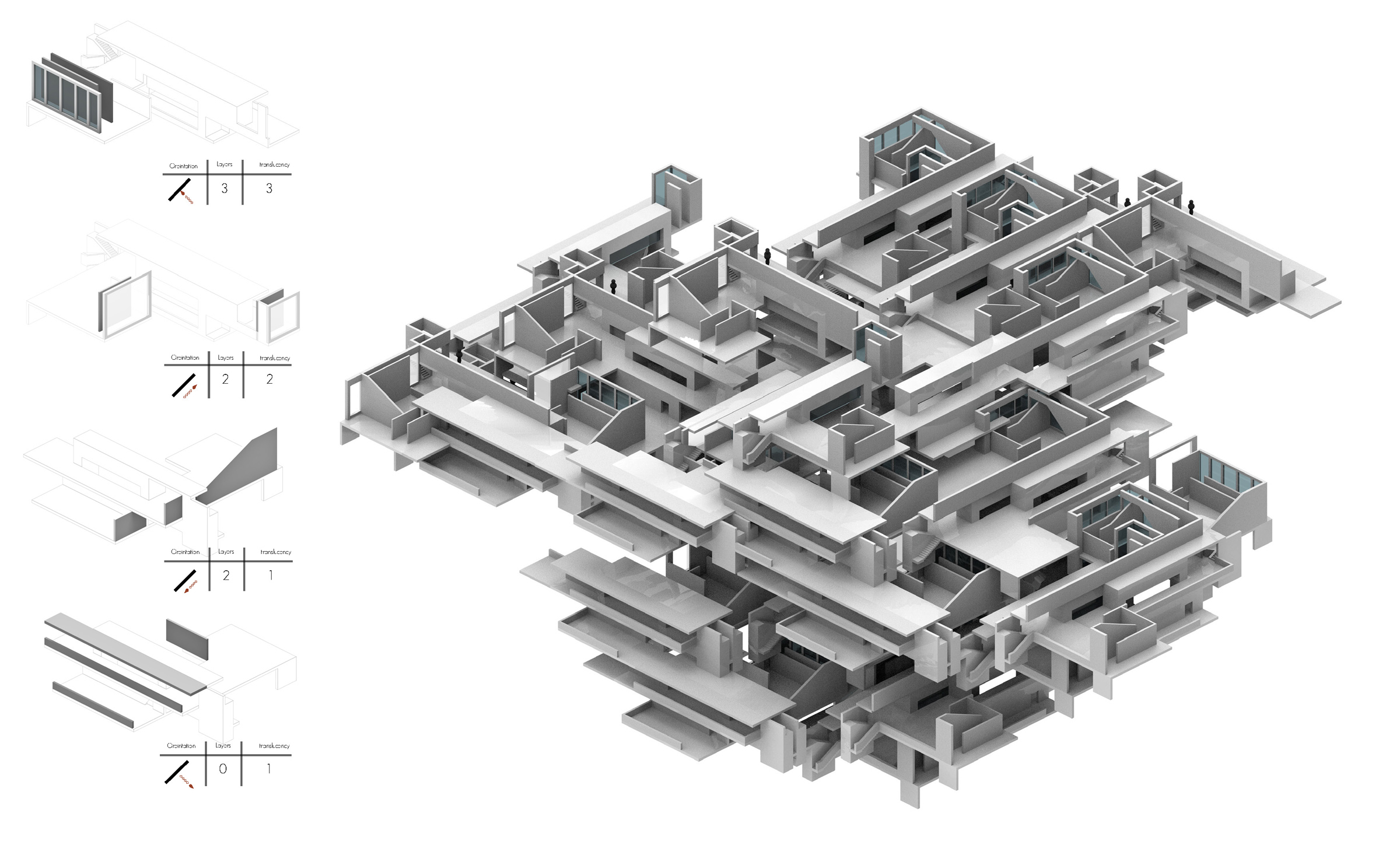 “One must turn the task of thinking into a mode of education in how to think.”[1]

These words from the philosopher Martin Heidegger point towards new modes of thinking. As architects, one can mention Mario Carpo’s remark about the huge amounts of data that are available for everyone nowadays: most of it is underused.[2] As this essay will argue, this new condition of Big Data, and the digital tools used to comprehend and utilise it, can trigger an entirely new way of thinking about architecture. It is a way to both open doors for testing, and an opportunity to look back into history and re-evaluate certain moments in new ways. As an example one can take Brutalism, which emerged as a post-war period solution in the 1950s. It was a new mode of thinking about architecture that was influenced by Le Corbusier’s Unité d’Habitation de Grandeur Conforme, Marseilles (1948–54), the Industrial Revolution and the age of the mechanical machine. Brutalism can be read as the representation of reading the building as a machine at that time. Luciana Parisi has expanded on this idea, writing that Brutalism can be considered as the start of thinking about architecture as a digital machine, having removed any notion of emotion from the architectural product, leaving a rough mass of materials and inhabitable structures.[3] In Parisi’s sense, brutal architecture can then be read as a discrete system of autonomous architectural parts brought together with a set of rules: symmetry, asymmetry, scales, proportions, harmony, etc. These rules, materials and structures act autonomously using collective behaviours to produce data. The data can then be translated into concrete compositional elements which form a building, a city or a whole territory. The adjacencies between each discrete compositional element creates the relations between those parts.

The building as a machine departs from Le Corbusier’s claim for a functional architecture.[4] Today, the use of machine learning and artificial intelligence means that machines are no longer used only for making. They are thinking machines.[5] This allows a new translation of Le Corbusier’s understanding of function, asking the questions: what if architecture acts as a mode of thinking? How would a building as a thinking machine perform?

One historical example is the Rasoulian House (1904) which was designed to provide a state of comfort for its users throughout the year. A basic architectural element known as the wind catcher tower, or Malqaf, provided the building with breeze. As Sarinaz Suleiman described, the Malqaf is a composition of architectural elements that work together to create air flow. These elements include walls, doors, rooms and include the basement and the courtyard, organised in a specific order, proportions and orientation to create specific relationships between the inside and the outside.[8]

The Malgaf is the first point at which air flow enters the building. It then travels down a shaft which is the first interior space that the wind interacts with. The air continues to a second interior space through a window-like opening into a room, and then is moved through an opening in the room’s floor to a cellar space under the building. This third interior space is the coolest space in the building. The cellar is connected to the courtyard through an opening that facilitates air circulation and absorbs wind. For this to happen, two kinds of relationships need to exist: the exterior relation formed by the geometry of two elements, e.g. the height of the Malqaf and the width of the courtyard which help to create a high difference in air pressure, and an internal relation which is controlled by the openings between the interior spaces and between interior and exterior spaces as well. Ventilation is not only a void space, but another level of interiority inside the building.

Another example of a complex ventilation system is a data centre building.[9] Data centres usually produce vast thermal exhaust which requires constant air movement, requiring large depths to ceilings and floors which may be as big as the building itself. Servers are positioned in the room with a certain distance between each other. This distance is related to the degree of temperature and the air circulation speed. Higher temperatures inside the room are used to decrease air pressure and create a pressure difference that enables air circulation naturally in the room. The path that the air travels allows the air the time it needs to cool down naturally.

Hundreds of years ago, Vitruvius described wind, saying that “wind is a flowing wave of air with an excess of irregular movements. It is produced when heat collides with moisture, and the shock of the crash expels its force in a gust of air.”[10] Vitruvius’ definition can be deconstructed into two parts, the first of which deals with the dominant wind direction and its relation to the outer envelope of the building. This concept was emphasised by Vitruvius’ example of the Octagon Marble Tower (15th century BC). The second part relates to the process of creating wind flow in nature. Vitruvius explains that air circulation occurs when two different air pressures encounter each other. The difference in the air pressure always happens as a result of changes in temperature and moisture. High temperature heats up the air causing low density and consequently low pressure areas, and lower temperature will create a high pressure area. This concept is the logic that has been followed in all passive ventilation systems throughout history. These systems tend to create two points with a high difference in pressure, connecting these two points with a path that needs to be ventilated. This path would then move through the building accelerating air movement from the high pressure area to the low pressure area creating air flow inside the building.

A traditional building from the Middle East can be taken as a case study for applying thermodynamic logic to create natural air circulation in a building. In the previous example of  Rasolian House, the side that is exposed to the sun is heated up by the sun. Consequently, air pressure decreases. The geometry that is exposed to the sun creates shadowed areas inside and outside of the building. These shadowed areas are much colder and have high air pressure. Air circulates from the high pressure to low pressure areas. That means air can move from a cooler courtyard to an upper space located above it. This air movement absorbs the air from inside the building to fill in the void in the courtyard that the high pressure air had left behind when it moves upwards. Due to the opening at the top of the shaft, air will enter the building to fill in the void that the inner air has left behind as well. This air replacement creates the air circulation inside the building. The creation of wind is dependent on the design of the inner space and its relation to the outer space through openings. This means that, by closing and allowing openings, wind can be created or stopped, and by changing some openings, the wind flow path can be changed, and wind speed could increase or decrease. This follows a logic of discrete, combinatorial air flow.

Computation Ventilation on the Urban and Architectural Scale

The building can be seen as a machine for creating an environmental condition through compositional thinking. This way of thinking turns the building, in the case of the Malgarf, into a switch that can turn the air flow on and off.  In this instance, the creation of wind is entirely dependent on a series of elements that are well- organised and ordered. From this combinatorial thinking, wind can be read as a form of pre-digital computation considering the inside-outside sequences as what causes the air flow.

The order of inside-outside also plays an important role in disrupting air flow. A single element that has been extracted from a building can serve as an example. It is a corridor, but at the same time this element plays a crucial role in creating wind. The way that the walls are arranged produces a contrast between the inside-outside spaces. Moreover, the design and arrangement of the openings turns the corridor into a path for air. Taking this element as a discrete part, and rearranging its parts within the same local rules that have been set over the ventilation logic, another version of the element emerges. Following this same logic would give different versions of different elements. Further on, each version of each element has its discreteness and can be upscaled. With this upscaling strategy, more complex interiors emerge.

By integrating an environmental aspect within the design process, a new type of building that embraces another wind geometry can be created. This provides an opportunity to design highly dense architectural forms that can reassure the qualities of the internal space. By nesting interiors one can create different low and high pressure areas over inside-outside sequences. This allows a rethinking of the inside-outside arrangement in the city according to what positive or negative sequences are created. For example, for more similar interiors less contrast in air pressure needs to be produced. For more variation between the interiors, the contrast in the air pressure needs to increase and more air will flow. An air circulation concept can be used as a means to arrange both interior and exterior spaces in the building and in the city.

At an architectural scale the interior-exterior relation can also be managed by the building façade. The façade tends to be used to provide separation between indoor and outdoor spaces as well as between a tempered and non-tempered environment in order to achieve comfort. However, a new understanding of wind circulation can provide a well-tempered environment regardless of the façade. In other words, façade here can be seen as the tools or the elements that provide comfort and facilitate air circulation inside the building.

A façade needs to meet specific criteria in order to generate a difference in air pressure just like the inside-outside arrangement in the city scale. Three design parameters can support this: the orientation of the elevation in relation to the sun, the number of layers that are needed to create more or less tempered areas and the degree of translucency of the façade that helps to prevent or allow sunlight which helps in its turn to reach the preferred temperature. The facade is not any more the envelope of the building, it is the layers that are responsible for providing the comfort inside the building.

Indeed, thinking about architecture through architecture’s interiors can expose low-tech computation that starts from a thermodynamic discreteness. This enables the understanding of spatial sequence that can support different levels of space in a building and the notion of layers of building-in-buildings. If this concept is upscaled to the scale of the city it could be an opportunity to study the kinds of patterns that mereology can create utilising environmental thinking. This means that a building, or even a city, could become an example of the campfire that Banham aimed to reach many years ago.[11]

[11] R. Banham, “The kit of parts: heat and light,” The Architecture of the Well-tempered Environment (Chicago: Chicago Press, 1969).